“I grew up in a deli,” says Daniel Bonanno, a James Beard Award semifinalist for Rising Star Chef of the Year in 2013 and owner of Madison-based restaurant A Pig in a Fur Coat and the Alimentari deli. “My dad ran Tenuta’s Deli for about 50 years.”

And that’s where he cut his teeth as a boy- turned-renowned chef — working alongside his brother after school and during summer breaks at the Kenosha-based Italian deli and grocery store.

After graduating from Le Cordon Bleu in Minneapolis, he truly dug into that Italian heritage. Cooking at Spiaggia in Chicago as its sous chef, Mangia Wine Bar in Kenosha and Grand Geneva Resort & Spa’s Ristorante Brissago in Lake Geneva were followed by a year-long stint in Italy. Then came his two Madison establishments. Both are on the city’s east side.

While studying culinary arts in Apicius International School of Hospitality in Florence, Italy, Bonanno met his business partner,Bonnie Arent, a Racine native. The two decided to establish roots back in Wisconsin, opting for Madison as a fresh start.

“What I wanted to do is focus on my Italian heritage,” says Bonanno about A Pig in a Fur Coat, which opened in 2012, “but use local Wisconsin farmers. Some of the Wisconsin farmers are the best in the world. We have farmers my age running farms.” The menu shifts based on what’s in season and available, but often folds in grains, vegetables, duck and as much of a cow as possible. It’s not uncommon for Bonanno to work with farmers on seed selection and feed trials with the animals, with a unified goal of offering the best flavors.

Open since 2018, Alimentari is run by his brother, Enrico, and is “a deli for the home cook,” says Bonanno, with customers often asking for cooking tips. Fresh pastas, sauces, meats and cheeses, sandwiches and antipasti, plus Italian imports (such as canned tomatoes) line shelves and fill cases.

When it comes to cheese, Bonanno adopts a global view and, like any successful restaurateur, wants to set himself apart. He points out the ubiquity of cheeses made within the state’s borders, so he selects cheeses made elsewhere, so he can introduce diners to different varieties. 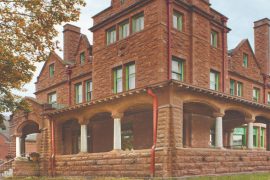