Baraboo saw the birth of the Ringling Brothers Circus in 1884 and, today, the city — which is about 13 miles south of Wisconsin Dells — is home to the Circus World Museum.

But now something more is brewing.

The 1906 mansion of circus showman AL. Ringling and his wife, Lou, was abandoned in 1916 after his passing and had already fallen into disrepair once his living relatives moved away. The local Elks Lodge purchased it in 1936 for $6,000 and added a ballroom in 1948.

When three business partners took over ownership in 2013, they decided to invest $800,000 in the restoration of the stately structure and turn the ballroom into AL. Ringling Brewing Co. During renovations, a Ringling family beer recipe was found in a wooden box under the floorboards — this smooth and curiously hops-free brew is their flagship beer. The brewery offers 16 house-made brews on tap.

Designed like a German beer hall, the taproom showcases beautiful chandeliers, a 1902 self-playing Gavioli band organ and a mural depicting a Ringling Bros. Circus parade. Wood from the lanes of a basement bowling alley became beer hall tables and a mezzanine floor, while the subterranean level now houses a 63,000-piece miniature circus with a 30-foot big top tent.

A short food menu offers empanadas and some Ringling family recipes to go with the rotating beer list, and the mansion itself is not only open for tours, but also offers overnight room rentals. 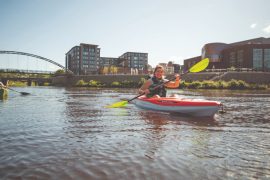