Besides a zoo or safari park, there aren’t many other places you’ll find lions, tigers, bears, giraffes, wolves, panthers, leopards, camels, rabbits, pigs, horses and hyenas all in one place—except on an antique carousel and its menagerie of animals. Carousels have long been a fixture in some Wisconsin parks.

Simply put, a carousel is a ride consisting of a rotating platform with seats for passengers. The seats are traditionally attached to wooden horses or other animals and the creatures are moved mechanically in an up and down manner to simulate galloping, accompanied by organ music.

While the terms are often used interchangeably, an authentic carousel features only horses. A merry-go-round includes all sorts of animals, and has bench seats as well. Carousel is the name most often used in North America, while in Europe the term merry-go-round is more common. However, both terms are understood today to mean about the same thing.

The word carousel originates from the Italian words garosello and Spanish carosella (“little war”), used by Christian crusaders to describe a cavalry combat exercise engaged in by horsemen. Crusaders brought the idea of equine combat preparation back from the Holy Land with them to their native countries.

The earliest known carousel is depicted in a Byzantine bas-relief sculpture showing figures projecting from the background, dated at around 500 AD. This depiction features riders in baskets suspended from a central pole.

In this country, the first carousels were put together by farmers who wanted to create interesting playthings for their children. Farmers attached primitively carved horses to a carousel that was powered by mules. Around 1900, towns began placing picnic groves at the end of trolley lines to attract riders and eventually turned those groves into amusement parks.

Between 1885 and 1930, American craftspeople created more than 2,000 hand-carved wooden carousels. Woodworkers spent the most time carving the horses that rode along the outside of the carousel. That’s because these horses are larger— there’s more room on the outside of a carousel—and they would catch spectators’ eyes watching from the fairgrounds. The horse that is on the outside directly behind the chariot is referred to as the “lead” horse. This one is usually the fanciest.

During the Great Depression, many amusement parks closed. Carousels were dismantled and the carved horses discarded,  except for the ones that were retired to the homes of park employees and other enthusiasts who came under their spell. Some 70 years ago, as carousels began approaching endangered species status, people began collecting them.

Relive the days of fair fun at this seasonal park, open May through September. Bay Beach’s carousel features vibrant, candy-colored horses and bench seats for a gentle ride. The park also boasts traditional rides (Tilt-A-Whirl, bumper cars) as well as faster rides, like a roller coaster and the swinging Sea Dragon.

Children and adults alike thrill at the opportunity to take a spin on Ella’s Deli’s Parker Carousel. Built in 1927 in Leavenworth, Kansas, the carousel operated in a park for over 20 years in North Tonawanda, New York. After the park closed, the carousel was dismantled and put in storage, where heat and moisture damaged it. Restoring this special ride took many months and considerable effort.

The zoo’s Conservation Carousel began spinning in 2006 and has 36 animals on it which depict endangered species—like an okapi and a seal. This horse-free attraction also has murals that depict life around Dane County, where the zoo is located. It’s staffed by volunteers and the ride cost helps fund the operation of the free zoo.

HOUSE ON THE ROCK, SPRING GREEN

Although you can’t ride this one, it’s an amazing sight to behold at this quirky attraction. “The world’s largest carousel” took a decade to construct and features 269 handcrafted animals (none of which is a horse), 182 chandeliers and over 20,000 lights.

The antique 1920 carousel is located within this beautiful 400-acre park that overlooks Lake Winnebago. Families will also enjoy a large playground, petting zoo, small rides and lighthouse to peer out at  the water. 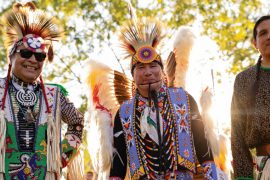 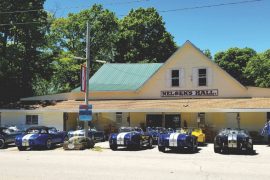