Curd is the word in Ellsworth (pop. 3,200), especially during June Dairy Month. This town in Pierce County hosts a gooey, squeaky-good festival that attracts thousands of foodies.

The annual Ellsworth Cheese Curd Festival (held this year on June 21-22, 2019) began as a typical small-town gathering: a little music, a little food and camaraderie among neighbors. That was 17 years ago, and the event name quietly acknowledged the agricultural town’s best-known dairy product.

A governor’s written proclamation dubbed Ellsworth as Wisconsin’s Cheese Curd Capital back in 1984, when the Ellsworth Cooperative Creamery was churning out 19 million pounds of white-cheddar cheese curds per year. Now 180,000 pounds per day are produced, and Ellsworth goes through 2.5 tons of cheese curds during the two-day festival.

Fresh cheese curds squeak when a bite is taken, but much of the festival bounty is hand-dipped in a beer batter and deep-fried. Visitors can eat the melted curds just like this—or order them rolled in cinnamon sugar. The creamery traditionally comes up with a third option too, and this year it’s a cheese curd whose flavor weaves in bacon and jalapeno pepper. (In 2018 one of the creative, complex and well-received offerings was chorizo sausage and cheese curds in a jalapeno pepper, wrapped in bacon and then smoked.)

Ellsworth Cooperative Creamery works with Wisconsin craft brewers too, developing a flavored cheese curd for each to match with a specific beer. The craft-curd pairings are shared, sampled and voted on during the festival.

Ice cream samplings occasionally contain cheese curd crumbles. And in curd-eating contests (where speed matters more than quantity), there are divisions for adults and children.

The event’s 20 food vendors are required to have at least two menu items that contain cheese curds. Expect poutines (fries and curds topped with gravy) and cheese nuggets in quesadillas, grilled cheese sandwiches, tacos, kebabs and more for a cheese-tastic time. 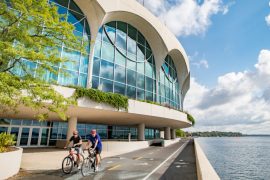 Six Running and Walking Trails to Try in Madison 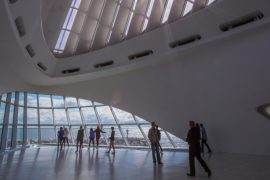 Eat Your Way Through the Wisconsin Coastal Food Trail