Nearly every major city has an arts hotel but downtown Milwaukee’s Saint Kate Arts Hotel—open since June—takes the concept to the next level. After all, it’s named after Saint Catherine, the patron saint for the arts.

Before reaching the check-in desk, you’re greeted by a Deborah Butterfield horse sculpture crafted from driftwood, and the retail shop sells art books—not toothbrushes. Home to the first resident theatre company at a hotel, opportunities to immerse in art are everywhere, from drawing paper and colored pencils in the rooms to the lobby’s “poetry phone” (just pick up the receiver and tune in). Another first: an art museum pop-up in a hotel—this one a satellite Museum of Wisconsin Art location (whose flagship is in West Bend), featuring works by portrait painter David Lenz alongside up-and-coming artists.

Décor in each of the 219 rooms is where this artsy angle truly shines. The black/white sink design—part of Kohler’s Artists serie

s—arose out of a design competition. Lampshades were designed by Bay View Printing Company. Crosby record players add funk with the option to switch out albums at the check-in desk. Five rooms are dubbed “Canvas” rooms and were outfitted by artists who include recent 2018 Mary L. Nohl Fund Fellowship winner Rosemary Ollison (her repurposing of fabric leads to chic shag rugs, quilts and an Outsider Art aesthetic) and Lon Michels’ leopard-print-infused design.

While part of the Marcus Hotels and Resorts family—which also includes The Pfister Hotel in Milwaukee, Grand Geneva in Lake Geneva and Hilton Madison Monona Terrace in Madison—this is an indie boutique hotel. Marcus’ CEO Greg Marcus and his fashion-designer wife Linda, (who appeared on season 15 of “Project Runway”) were very hands-on with Saint Kate, which reveals itself to be a love letter to not only Milwaukee, but also their shared passion for hometown art. 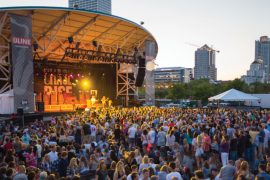 Add These 7 Summer Festivals to Your Calendar 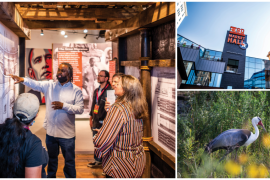 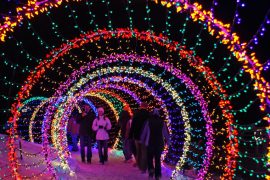