Once a corridor of machine shops and warehouse spaces, Walker’s Point has evolved into Restaurant Row.

Though locally-focused and highly conceptualized restaurants are scattered throughout this south side Milwaukee neighborhood, the greatest concentration of restaurants can be found along Second Street.

Chef Peggy Magister became a trailblazer when she opened Crazy Water (crazywater.com) in 2002 at 839 S. 2nd St. Once an old German beer bar, the tavern was transformed into a cozy and warm space, the perfect template for Magister’s American fusion cuisine and expansive list of California wines. The heart of Crazy Water was behind the bar; there, Magister placed her kitchen, and passersby on 2nd Street could enjoy the show from the front window. Just this year, Magister, with her nephew Justin Anthony, opened the A.P. or All-Purpose Bar and Kitchen (apbarandkitchen.com) just across the street at 814 S. 2nd St. Chef Daniel Pope, who worked in notable Chicago restaurants Avec, Blackbird and Sepia, helms the kitchen, and focuses on small plates like chorizo stuffed dates with adobo chile barbecue sauce, feta “fondue” with watermelon and a divine kale salad made with pomegranate seeds, fresh figs and buttermilk dressing.

Unpredictably delightful results are what you can expect at the new eatery, Wayward Kitchen, owned by Megan and Tyler Mason. Tyler makes his own kimchee, which goes perfectly with chorizo rice or braised spare ribs. The inventiveness doesn’t stop at entrees. One of the best things on the menu is his arancini. Traditionally, arancini are savory rice balls, coated with bread crumbs and filled with bits of meat. Tyler put his on the dessert menu – by making a coconut rice pudding filled with nutella, then finishing it with cinnamon sugar and homemade orange marmelade.

Just about everything is local at Braise Restaurant and Culinary School, 1101 S. 2nd St., braiselocalfood.com. Chef David Swanson not only uses local ingredients and teaches classes about them, but he also procures ingredients for other area restaurants through his first in the country Restaurant Supported Agriculture or RSA. Like a CSA but for chefs, Swanson brings fresh produce, meats and dairy products from local farms and distributes them to chefs. He also hosts farm dinners – both at his restaurant and at his favorite farms. “There’s such a disconnect between what’s being grown and what’s being consumed,” Swanson says. “We work with about 400 different, local farms.”

But you don’t need to travel far for mozzarella and other fresh cheeses. Clock Shadow Creamery, Milwaukee’s first cheese factory, also makes its home on the corner of Bruce and 2nd streets, clockshadowcreamery.com. “Our advantage is we can get cheese to people that’s fresher than anything people can import or get from across the state,” says cheesemaker Bob Wills. The creamery shares its space with Purple Door Ice Cream, which makes such luscious flavors as salted caramel and whiskey, made with Great Lakes Kinnickinnic whiskey, purpledooricecream.com.

Fresh chocolate can also be found at Indulgence Chocolatiers, indulgencechocolatiers.com, 211 S. 2nd St., which not only sells truffles but pairs them with wine, beer and cheese. Delicately ornate truffles are also sold at Atomic Chocolate Co., atomic-chocolate. com, which is located inside Times Square Pizzeria, which is found inside a gas station plaza at 605 1st St. “Two of the things I do well are pizza and chocolate,” says Sean Henninger, whose business card simply identifies him as “genius.”

Monday brunch – yes, that’s not a typo – is also done quite well in Walker’s Point. The Noble, nobleprovisions.com, 704 S. 2nd St., is a tiny restaurant packed into a bar space that serves up stunning dinners, but it shines come Monday morning with its service-industry-friendly brunches. Amazing pancakes, giant sausage patties and creative egg dishes round out the brunch, which is served until 3 p.m. It’s fantastic any time of the year, but it’s especially enjoyable in warmer months when its patio is open.

Just next door at 135 E. National Ave. is Blue Jacket, bluejacketbar.com. While La Merenda’s cuisine goes global, Blue Jacket is intensely third-coast centric. From planks of smoked fish to beer only sourced from around the Great Lakes to only coastal wines, the menu celebrates culinary waterways. Of special interest is the drink menu, designed by Bittercube bitters mixologists Ira Koplowitz and Nick Kosevich. Try Of the Older Bumble, a rum old fashioned that tastes divine with the smoked trout.

If you have a limited amount of time and want to taste all you can in Walker’s Point, call up Milwaukee Food Tours, milwaukeefoodtours. com, and do a Walker’s Point Dine Around tour where you can eat and drink your way through the neighborhood. Don’t worry about driving – it’s by bus. 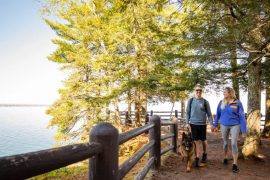 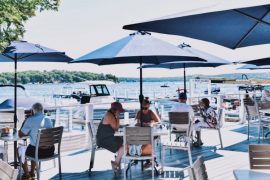 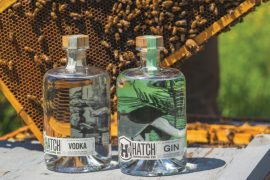