Sparkling blue lakes often evoke summertime fun. And plenty of people certainly flock to the shores of Geneva Lake when the weather warms. Yet there’s plenty of fun to be had in Lake Geneva year-round — especially during the fall and winter.

Tour boats still glide around the lake in September and October, now showcasing the town’s historic mansions surrounded by a blazing palette of red, gold and orange. The trips offered by Lake Geneva Cruise Line all feature live narration, with some also offering a snack bar and cash bar. Specialty cruises are available, too, like the Ice Cream Social tour aboard the Grand Belle of Geneva. During the holiday season, the Santa Cruise transports you to Santa’s Hideaway. During your voyage, you’re treated to lighted displays along the shore.

Cyclists appreciate the wide variety of biking options in the area, which also allow riders to take in the stunning fall foliage. The Lake Geneva Bike Path hits every corner of town via five color-coded segments, which lead you through the downtown, to a city park and around wetlands and forested areas. The 19-mile White River State Trail, just a few miles outside of town, connects the towns of Elkhorn and Kansasville. A ride (or hike!) along this flat path takes you past scenic, glaciated landscapes and across old railroad trestles and bridges. Mountain bikers have nearly 20 miles of trail available between the Adventure Center at Grand Geneva Resort & Spa and Lake Geneva Ziplines & Adventures.

When the snow flies, grab your winter gear and be prepared to have a blast. Skiers and snowboarders can fly down the slopes at The Mountain Top at Grand Geneva, which features 20 downhill ski runs of varying difficulty, plus a six-acre terrain park. At nearby Wilmot Mountain, you’ll find four terrain parks, more than a half-dozen ski runs and a tubing hill.

Cross-country skiers can check out the trails at Grand Geneva and Big Foot Beach State Park, or use the White River State Trail, which is also open to snowshoeing and snowmobiling. Ice skaters have loads of options, as several resorts have skating rinks. Snowshoe trails wind around many resorts, too, and you can also tromp around Big Foot Beach and the 100-acre grounds at Lake Geneva Ziplines & Adventures. While there, you may want to take a zipline ride, an experience that is especially thrilling in the winter. Tackle four or nine lines, sky bridges, spiral staircases and more.

MORE THAN THE OUTDOORS

Of course, fall and wintertime fun doesn’t simply equate to outdoor sports. There are plenty of other ways to entertain yourself during these seasons, such as attending a festival. Lake Geneva’s annual Oktoberfest (October 9-10) bash celebrates all things German – and fall – with activities such as a stein-hoisting contest, pony rides and Dachshund races. There’s a beer tent offering German-styled suds, of course, plus foods such as bratwurst, apple cider donuts, potato pancakes and soft, chewy pretzels. Dozens of vendors and artisans are also part of the mix, as are polka bands.

A few months later it’s time for Winterfest (Feb. 1-5). The celebration includes the U.S. National Snow Sculpting Championship, with more than a dozen teams from around the country competing. Sculpting concludes early Saturday afternoon, and visitors can vote for their favorite as part of the People’s Choice Award. Then take a stroll downtown to view a number of sparkling ice sculptures, or warm up at the beach around an evening bonfire.

If you’re more in the mood for a relaxing getaway, that’s perfectly acceptable — and encouraged. For the Lake Geneva area is home to a wealth of spas, both local and those that lie within one of the area’s numerous resorts. Book an aromatherapy massage at Avani, the spa at The Abbey Resort, or try a detoxifying herbal mud wrap at Clear Waters Salon Spa in Williams Bay. Calladora Spa at Lake Lawn Resort has a eucalyptus steam room and couples services.

After your spa service, take in some live entertainment. And there’s more than live music available. Tristan Crist Magic Theatre offers both magic and comedy shows, for example, while The Dancing Horses Theatre is the place to catch a Vegas-styled horse show. During the show, a variety of elegantly clad horses, many of whom have performed at sites such as Walt Disney World and Arabian Nights, will dazzle with their artistic performances.

No matter the season, Lake Geneva always makes a fun place to shop, as the city’s walkable downtown is filled with a variety of boutiques and one-of-a-kind stores. Think wine shops, art galleries, antiques stores, clothing boutiques and more. You’re also welcome to stroll along the Geneva Lake Shore Path, where the mansions along the shore are generally quiet now that summer has passed.

Many people associate Lake Geneva with resorts, and the town certainly has plenty of prime options if that’s your preference. Grand Geneva is a perennial favorite, with its spacious, 1,300-acre wooded grounds and loads of amenities, including two championship golf courses, ski hills, a spa and well-regarded restaurants. But the area is also home to vacation rentals, hotels and B&Bs, such as the four-bedroom T.C. Smith Historic Inn, tucked into an 1865 home.

Dining is another area where you can’t go wrong. One of the most popular local eateries is Geneva ChopHouse, an elegant space at Grand Geneva known for its mastery of steak and fine wines. Egg Harbor Café is another favorite. The breakfast, brunch and lunch hot spot is known for using top-quality ingredients, which are often all-natural or organic. Try the Key West crepes, stuffed with fresh kiwi, strawberries, banana and strawberry cream cheese. Pizza lovers should check out Next Door Pub and Pizzeria, where the ‘za is made from scratch, then fired in a stone hearth. And for a Friday fish fry, follow the locals to Anthony’s where you’ll find generous portions of deep fried or baked cod served with potato pancakes, French fries, coleslaw, applesauce and bread.

After spending some time here in the off-season, it just might become your favorite time to visit.

Melanie Radzicki McManus is a freelance writer specializing in travel. She has received numerous awards for her travel writing, most notably Lowell Thomas gold and grand awards, considered the most prestigious in the field. Her book "Thousand-Miler: Adventures Hiking the Ice Age Trail" was published in 2017 by the Wisconsin Historical Society Press. 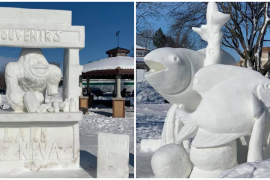 Blatz from the Past: Wisconsin’s Brewing History