Make this Mississippi River city your must-stop this fall and winter with plenty of arts and culture to experience, cuisine to taste and even craft brews to toast.

From Midwest-based big brands like Duluth Trading Co. (pick up some fall hiking gear or a soft flannel shirt) to boutiques such as the brand-new Drift Mercantile Co. (this general store with a modern twist celebrates Midwest makers of candles, clothing and more), eclecticism rides high in downtown La Crosse. Score from big to small—from a chic necklace or an upcycled farmhouse-style table— at Painted Porch, or pick up some new-to-you titles to cozy up with this winter at Pearl Street Books, which sells new and used books. Surf & Scotch, a new arrival to Pearl Street, lets you bask in the glow of casual surf-town couture, things like graphic tees and Herschel Supply Co.’s backpacks in fun prints and hues. For the tots in your life, pick up gifts at The Toy Shop, open since 2015 and specializing in brands like Melissa & Doug. The two-year-old Willow Boutique specializes in gals’ attire, from athleisure to LBDs.

Hosted at Riverside Park, the Rotary Lights Holiday Display (Nov. 23-Dec. 31) is the state’s largest light display. It’s as much about the glowing lights as it is interacting with live reindeer or jogging in the 5K Ugly Sweater Run. rotarylights.org

The La Crosse Storytelling Festival (Sept. 7-8), the state’s only storytelling festival held in Myrick Park, reveals some great yarns to put you on the edge of your seat. The weekend after Labor Day kicks off on Friday night with spooky tales, followed by a family-friendly Saturday daytime lineup and the evening’s adult-only cabaret show. lacrossestoryfest.com

FROM DAY TO NIGHT

Put on your comfiest shoes because you’re going to log many steps through downtown La Crosse, blending a mix of historic and contemporary sites.

9 A.M. Grab coffee and powder-dusted beignets at The Parlour, the ground-floor, vintageinspired café inside the Charmant Hotel, and linger over the paper.

9:45 A.M. Stroll in Riverside Park, which hugs the Mississippi River, and take time to relax on a park bench.

1 P.M. Break for lunch—pick burgers and beer at the three-year-old The Crow, like a cheese curd burger, Aloha burger or Sriracha bourbon pork burger. Or, the vegetarian-friendly The Root Note has lots of choices, like the cheesy, savory crepes. You won’t be sorry!

3 P.M. Work off that lunch with a hike up Grandad Bluff. Bring your camera to capture the view—in addition to Wisconsin views, you might see Iowa!

7:30 P.M. Treat yourself to a live show—such as a musical, play or concert—at the Weber Center for Performing Arts. If it’s a dark night, take in a current blockbuster hit at the beautifully restored Rivoli Theatre.

Grandad Bluff, a 600-foot-tall city-owned bluff on La Crosse’s east side, is a favorite hiking spot for locals. On a clear day, the panoramic view of La Crosse is stunning. In town for New Year’s Eve? You’re lucky: since the late 1920s, a fireworks show is set off on the bluff at the stroke of midnight—it’s La Crosse’s version of the ball drop in Manhattan. You’re likely to see the University of Wisconsin-La Crosse campus, I-90 and the gorgeous Mississippi River, as well as two neighboring states (Iowa and Minnesota). Once white powder hits, Mt. La Crosse Ski Resort, open since 1959, is open daily for downhill skiing and snowboarding. There are 18 slopes and trails, and three chair lifts plus one rope tow. If you’re brave enough, test your fear on the Damnation, which is the Midwest’s steepest trail. Next to Grandad Bluff, Hixon Forest Park is a premiere spot for cross-country skiing, with trails dutifully groomed by the city after each snowfall. Distances on the trails range from 1K to 8K, depending on skill level and time available to ski. That one of the entrances is near Bluffside Tavern means you can easily grab a pint after!

Part of the the Aparium Hotel Group—which also restored the Iron Horse Hotel in Milwaukee—the 67-room, red-brick Charmant Hotel debuted in the fall of 2015, inside the shell of a former 1898 candy factory. (Each guest even receives chocolates at check-in.) Guests pull in to the cobblestone street out front, a block from the Mississippi River and Riverside Park. Luxury is literally at every level, from the chai lattes in the darling Parlour café downstairs to the seasonal rooftop terrace’s vertical garden (serving cocktails like Mississippi Mules and wood-fired pizzas). Farm-to-table is the real deal at the hotel’s The Restaurant, using ingredients from organic prairie beef to Hook’s award-winning cheddar, and the wine list features some gems. Rooms feature exposed-brick walls and antique-style furnishings, plus spa-like baths. thecharmanthotel.com

Too cold and frosty outside to wander around? For dinner and a movie under one roof, visit the Rivoli Theatre and Pizzeria—originally a 1920s vaudeville theatre—and now a historic treasure. Movies are all first-run and the café is open for lunch and dinner. Got restless kids? Check out The Children’s Museum of La Crosse, with its extremely interactive exhibits like a decommissioned fire truck, pint-sized bank and store, and three-story treehouse. Or, hunker down in a cool café with a steaming-hot mocha or hot chocolate, like at the Jules Coffee House, whose closure in 2014 after 20 years devastated locals—only to reopen seven months later. Eats include bowls of chili, cupcakes and scones baked fresh each morning. Pearl Street Brewery’s 16 beers on tap in the taproom (open evenings only) prove that creative minds are behind the scene, with titles like Smokin’ Hemp Porter (yep, brewed with toasted hemp seeds) and Breakfast Beer among the selections. Live music is on Fridays and tours take place Friday evenings and Saturday afternoons.

Make the most of a lazy weekend with a leisurely brunch. At Fayze’s, you won’t eat light—opt for hearty dishes like a “Chunky Monkey” waffle (a Belgian waffle topped with bananas, sweet cream cheese, chocolate chips and sauce, and whipped cream) or stuffed egg burritos, paired with a signature Bloody Mary. Behind the sunny-yellow door at the Breakfast Pub & Club, items riff on ’80s films (case in point: “Kevin Bacon Bones” and “Mr. Mom’s Breakfast Tacos”). Uptowne Café & Bakery’s house-made biscuits with honey butter and jam are legendary, as are its trio of signature breakfast hashes cooked in a cast-iron skillet. Enjoy your breakfast with one of their refreshing mimosas. 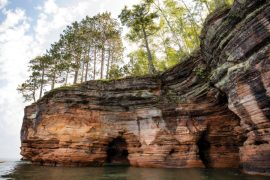 Experience the Best of the Apostle Islands 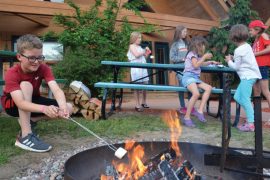 An Ultimate Guide to Badger State Retreats and Resorts