The first thing you notice is the fragrance, that soothing aroma that announces you’re in the presence of lavender. But follow your nose and your eyes are soon rewarded as you glimpse row upon row of the plants, basking in the sunshine and beckoning for you to come closer.

Known for its dreamy scent and relaxation properties, lavender has been appreciated for millennia. Since ancient times, people have turned to the herb, a member of the mint family, for its healing and antiseptic qualities as much as for the pleasure of its fragrance.

Lavender thrives in places like the South of France, where the soil is dry and sun and warmth are abundant. Yet there are actually many types of lavender, and some hardy English varieties tolerate Wisconsin’s decidedly non-Mediterranean climate. Thanks to a lot of hard work—and rolling with nature’s unpredictability—a handful of lavender growers across the state have not only cultivated beautiful fields for visitors to stroll, but also harvested the herb to turn out everything from soaps and lotions to lavender-tinged pies, lattes and ice cream.

Wisconsin may never have had lavender fields if it weren’t for Martine and Edgar Anderson, who opened Fragrant Isle Lavender Farm & Shop and Le Petit Bistro on Washington Island in 2013.

The French-born Martine Anderson spent seven of her young adult years in Provence, where she fell in love with lavender and dreamed of one day growing her own. When she and her husband retired on Washington Island—located seven miles northeast of the Door County peninsula, and a good 4,000 miles from southern France—they smelled an opportunity.

The Andersons have since grown Fragrant Isle into the largest lavender farm in the Midwest, with more than 20,000 plants representing 14 different types of lavender.

The couple and their small staff are committed to farming naturally, forgoing chemicals and pesticides, and they cut, tie and dry lavender to be made into soaps, lotions, candles, oils and more that are sold in their Lavender Shop.

The Andersons also run Le Petit Bistro at the farm. From bistro chairs inside or a terrace overlooking the lavender fields, visitors can take their pick of lavender-infused macarons, chocolates and other treats, as well as sandwiches and salads at lunch.

“The first thing you need to do is try the ice cream,” Martine Anderson says. “It’s all-natural vanilla with lavender. It is absolutely divine.”

She also recommends taking a glass of frozen rosé tinged with the farm’s lavender syrup to sip on a bench out in the fields. “I promise you will be transported to heaven,” she says.

For years, the Andersons hosted the All Things Lavender Festival, which brought thousands of visitors out to the island, which claims just over 700 year-round residents.They’ve put a pause on the festival, focusing instead on activities that can be experienced throughout the blooming season, like picking your own bundles of fresh lavender or watching how the staff distills pure lavender essential oils that are used in Fragrant Isle’s products.

Or come simply to walk the fields. “It’s an experience you can’t really describe,” Anderson says. “It’s the fragrance and the color. It’s a perfect picture.”

Lavender Blooms Among the Bluffs

On the other end of the state, lavender is becoming a blooming business. A trio of farms have cultivated fields tucked between the bluffs of Baraboo located in south-central Wisconsin, finding opportunity in the sandy soil. The three even collaborate in holding the Sauk County Lavender Festival the weekend after the Fourth of July.

For Kehaulani and Andrew Jones, growing lavender starts with a deep care and respect for the land. They call their approach to Rowley Creek Lavender Farm “aloha-sustained agriculture,” a nod to their Hawaiian and New Zealand roots, respectively.

“It is a phrase we coined to mean that the land is sustained by love,” says Kehaulani Jones, “and based on a Hawaiian belief system that it is our responsibility and privilege to care for the land and the animals and to care for one another.”

The couple opened Rowley Creek in 2016 with their five children, turning a former hobby farm into a place where lavender thrives. They cultivate 23 varieties of the plant over about 2 1/2 acres, and showcase lavender-infused skincare products and other lavender goods in their boutique. Visitors can also purchase fresh-cut lavender and delicious lavender honey at the shop.

In addition to exploring the fields, visitors may also greet the farm’s goats, horses and other animals. Or they can sign up for a “respa,” a mini-respite that may take the form of a tour, class tea party, lavender skin therapy treatment or other special event that encourages healthy and creative living. And a farmstay overnight experience is in the works!

Lavender is also a family affair at New Life Lavender & Cherry Farm. In 2015, Aron and Laura McReynolds bought an abandoned farmhouse and started planting cherries, wildflowers, herbs and lavender on the property’s 40 acres. Two years later, the couple and their three kids opened the farm and farm store to visitors, and today they have more than 10,000 lavender plants made up of 24 varieties.

While an afternoon cup of tea at the farm is delightful, the Farm to Table Wagon Tour is an ideal introduction to New Life. The hour-long tour includes a wagon ride, during which a guide explains lavender and cherry farming and shows off the wildflowers, sheep, bees and fish that also call the farm home.

New Life also features a farm shop filled with lavender bath and body items, cherry and lavender culinary products, and gifts. But you’ll want to bring your appetite on this visit! From lavender tea, lemonade frost and lattes to lavender fudge and ice cream, there’s so much to sample. But Laura McReynolds recommends leaving room for the farm’s signature lavender cherry pie that they make fresh every morning. This past winter, the family expanded the farm store and kitchen, meaning they’ll be cooking up even more goodies this summer. The farm will also host a farm-to-table lavender dinner during the Sauk County Lavender Festival, July 5-6.

If Baraboo soon becomes synonymous with lavender, it may be thanks to Rebecca Powell Hill.

She started by creating Devil’s Lake Lavender Farm with her daughter Gabrielle Powell, extended family and Michaela Groth on 17 acres surrounding their house, set just a half-mile from the entrance to Devil’s Lake State Park. Open to the public since 2017, the farm now boasts 12,000 lavender plants in 30-plus varieties.

Visitors come to wander the fields and relax in big purple Adirondack chairs that dot the landscape. But that’s just the start of the lavender-inspired experiences to be had. Sign up for a class—on cooking with the herb, photography, rhythmic drumming or yoga with the farm’s friendly goats—or a private tour, writer’s workshop or spa service.

Powell Hill’s passion for lavender is rivaled only by her love for cooking, and she happily combines the two at Devil’s Lake Bistro, which she opened in Baraboo’s historic downtown. “My forte is cooking with lavender,” she says. “I use it to make tea, cocktails, lemonade, savory dishes like lemon lavender chicken to sweet items like pound cake, cookies and ice cream.”

Powell Hill, who is an author of “ChefMD’s Big Book of Culinary Medicine” (Random House), has also developed several accommodations near her farm, but the ultimate option for lavender lovers is the six-bedroom Airbnb on her property. It’s intended to satisfy curiosity about what it’s like to live among lavender, and it affords an experience that Powell Hill holds dear.

“The most special time for me is to go out into the field after midnight,” she says. “Seeing the Milky Way and the meteor showers from a nighttime lavender field is an experience of a lifetime.” 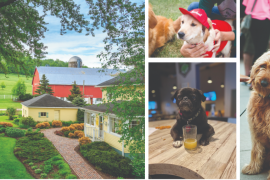 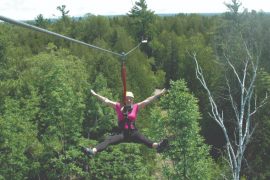 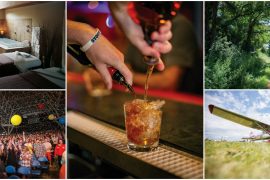