Many semifinalists for a James Beard Award, the food industry’s Oscars, work in the nation’s largest cities and in uber-competitive environments. Count two-time nominee Lisa Carlson as an exception: She busts stereotypes about fine dining and where to find it.

Carlson and partner Carrie Summer, (who are both Kansas City Barbeque Society Certified judges; Summer’s also a pastry chef), co-own the cozy Chef Shack in Bay City (population: 500), within a block of the Mississippi River. Their weathered clapboard building, a former tavern, is open—at most—three days and 14 hours per week.

Why here? The price and vibe were right.

“Ranch-rustic-country-French” is the cuisine, and this version of fine dining is far from pretentious. Notice the use of reclaimed materials, inside and out. Read the chalkboard for specials. The concise dinner menu morphs with the seasons.

Think brisket in lettuce cups with artichoke dressing, smoked duck with ramps, pasta made with beet juice and charcoal honeycomb ice cream. It’s fine to nosh at the bar, in front of the fireplace or linger in the backyard. Check out the chefs’ outdoor garden and brick oven, used for pizzas and more.

Carlson and Summer worked at high-end restaurants in New York City, San Francisco and London before heading to Minnesota to build their own brand and business. Th at began in 2006 with Twin Cities food-truck grub: bison burgers, beef-tongue tacos and Indian-spiced mini donuts with cardamom. Forbes, Saveur and Bon Appetit took notice.

But all is not Midwest in their world. Summer is a board member for Women Chefs and Restaurateurs, which fosters industry connections nationwide. And, winter rejuvenation happens abroad—typically in Asia. 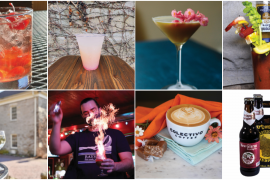 Our Favorite Drinks Throughout the State